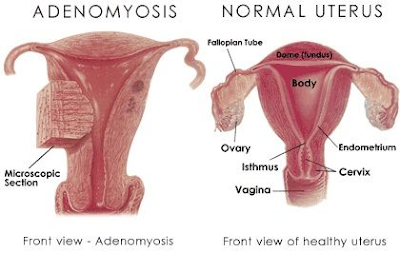 This condition can be experienced by women in all age groups, but is more common in the age of 40-50 years. Although generally considered harmless, adenomyosis can adversely affect the sufferer's quality of life.

When a person has adenomyosis, the endometrial tissue can still function normally. However, due to adenomyosis, the uterus will enlarge, and cause heavy bleeding and pain in the lower abdomen.

Some people with adenomyosis do not experience any symptoms. Sometimes there can be discomfort in the lower abdomen or pelvis, but only for a moment. While in other patients, adenomyosis can cause symptoms, namely:

Menstrual pain or dysmenorrhea is one of the symptoms caused by adenomyosis. Consult a doctor if menstrual pain feels excessive or unbearable, has occurred 3 cycles in a row, and has interfered with activities.

You are also advised to consult a doctor if the bleeding during menstruation is more than usual or bleeding from the vagina appears after  menopause .

Until now, the cause of adenomyosis has not been determined. However, experts suspect that there are several factors that can trigger adenomyosis, namely:

As a first step, doctors need to know the symptoms and perform a physical examination of the patient. The doctor will mainly examine the lower abdomen or pelvis to see if there is an enlargement of the uterus and the presence or absence of pain when pressed.

The diagnosis of adenomyosis is difficult to ascertain only from the symptoms that appear, because it is similar to other uterine diseases, such as fibroids , endometriosis , or endometrial polyps. To confirm the diagnosis, the doctor will need to perform additional examinations in the form of:

Treatment for patients with adenomyosis will be adjusted to the severity of symptoms, history of childbirth, and the patient's desire to have offspring in the future.

To reduce mild pain, self-medication can be done, by soaking in warm water or using a warm pad on the stomach. Over-the-counter pain relievers, such as paracetamol , can also be taken to reduce pain.

If these efforts have not been able to relieve the symptoms of adenomyosis or there is heavy menstrual bleeding, consult a gynecologist for further treatment. The obstetrician will treat it by:

Nonsteroidal anti-inflammatory drugs , such as mefenamic acid , may be given to reduce pain.

This therapy is given to patients who experience heavy bleeding during menstruation or unbearable pain. An example of hormone therapy is the birth control pill  .

This procedure aims to destroy the lining of the uterus that has adenomyosis. However, this procedure can only be done if the adenomyosis has not penetrated too deep into the uterine muscle.

In this procedure, the area with adenomyosis is irradiated with a special ultrasound device to remove endometrial tissue.

This procedure is performed to remove adenomyosis tissue through surgery. A new surgical procedure is recommended if other methods have not succeeded in eliminating adenomyosis.

This procedure is done to block the blood flowing to the adenomyosis area, so that the size will decrease and the complaints will subside. This procedure is performed on patients who cannot undergo surgery.

Hysterectomy or removal of the uterus is done if andenomyosis cannot be treated by other means. This procedure is only recommended if the patient no longer wishes to become pregnant.

Adenomyosis with heavy and prolonged bleeding during menstruation can cause anemia or lack of blood. In addition to anemia, adenomyosis can also interfere with the quality of life of the sufferer, due to discomfort during activities due to menstrual pain and heavy menstrual bleeding.