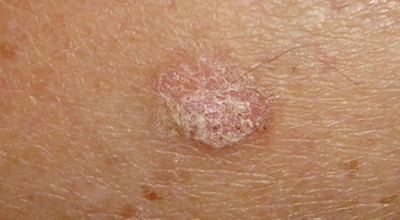 Solar keratosis or actinic keratosis is a condition in which the skin becomes rough , thickened, and scaly, due to exposure to sunlight for a long time or use of tanning to discolor the skin .

Solar keratosis is generally experienced by someone aged 40 years and over and people who are often active in the sun for a long time. Actinic keratosis develops slowly and causes no symptoms. Although rare, this condition has the potential to cause skin cancer .

Excessive exposure to sunlight (ultraviolet) is the main cause of actinic keratosis. Patients with solar keratosis will be more common in people who often do activities in direct sunlight and people who like to use tanning beds or skin blackening tools .

Actinic keratosis can affect anyone. Even so, a person is more at risk of developing the condition if:

Symptoms of actinic keratosis generally appear on parts of the skin that are often exposed to sunlight. Not everyone who is frequently exposed to the sun will experience actinic keratosis. However, if they appear, some changes that can occur in the affected skin area are:

Actinic keratosis is also painful and causes itching or burning around the affected skin area. This skin disorder generally occurs on the temples, forehead, scalp, face, lips, ears, neck, arms, and backs of the hands.

Immediately consult a doctor if there are changes in the skin. Patients with actinic keratosis are also advised to immediately see a doctor if they experience the following symptoms to watch out for:

If there are still doubts and it is feared that the spots you are suffering from are caused by other causes, a dermatologist will conduct a supporting examination. Investigations include skin examination with biopsy and dermoscopy.

When performing a dermoscopy, the doctor will use a magnifying microscope called a dermatoscope to examine the surface of the skin and any skin abnormalities that appear. In a biopsy procedure , the doctor will take a sample of the patient's tissue for further investigation in the laboratory.

Usually actinic keratosis can heal on its own without medication. Doctors can advise patients to use sunscreen and moisturizer so that their skin condition does not get worse. This is done to prevent recurrence if the skin is exposed to the sun continuously.

For certain cases, actinic keratosis needs to be treated with drugs, special therapy, and surgery. The type of treatment is determined based on the number of solar keratosis experienced, its thickness and location, as well as the patient's overall health condition.

Medications are used if there are many actinic keratoses on the surface of the skin. The solar keratosis medication given is a topical medication (oles) in the form of a cream or gel. These medications include:

In this procedure, the doctor will apply a chemical to the problem skin. Then, the doctor will use a special lamp to destroy the actinic keratosis. This therapy can cause side effects on the skin, such as redness, swelling, and a burning sensation.

In this procedure, the doctor will use liquid nitrogen to freeze and remove the actinic keratosis. Cryotherapy can cause problem areas to blister, appear darker, change skin texture, appear scarring, and develop infection.

For severe cases, surgery with scraping may be recommended by doctors as a solution to remove damaged cells. Initially the doctor will give the patient a local anesthetic injection, then scrape the damaged cells on the surface of the skin using a curette.

The operation will be followed by electrosurgery which aims to kill the infected tissue in the body using electricity. This surgery can cause side effects in the form of infection, skin blisters, and changes in skin structure in the operated area.

If treatment has been carried out properly, solar keratosis rarely causes complications. However, in certain cases these solar keratotic spots can turn into squamous cell carcinoma .

Squamous cell cancer is a skin cancer that is not life threatening. However, this cancer can spread to other tissues and organs of the body if not treated properly.

Protecting yourself from UV rays is very important to prevent the development and recurrence of actinic keratosis. If you are often active in the sun, it is highly recommended to take the following precautions: