Potassium nitrate remains in solution. Figure 1 shows this reaction in progress. The preceding reaction is an example of a metathesis reaction (also called a double displacement reaction), a reaction that involves the exchange of parts between two compounds. (In this case, the compounds exchange the NO3- and I- ions.) As we will see, the precipitation reactions discussed in this chapter are examples of metathesis reactions.

Solubility
How can we predict whether a precipitate will form when a compound is added to a solution or when two solutions are mixed? It depends on the solubility of the solute, which is defned as the maximum amount of solute that will dissolve in a given quantity of solvent at a specif  c temperature. Chemists refer to substances as soluble, slightly soluble, or insoluble in a qualitative sense. A substance is said to be soluble if a fair amount of it visibly dissolves when added to water. If not, the substance is described as slightly soluble or insoluble. All ionic compounds are strong electrolytes, but they are not equally soluble. Table 1 classif es a number of common ionic compounds as soluble or insoluble. Keep in mind, however, that even insoluble compounds dissolve to a certain extent. Figure 2 shows several precipitates. 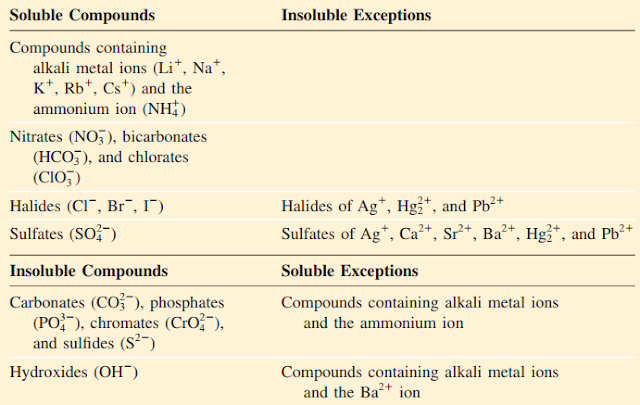 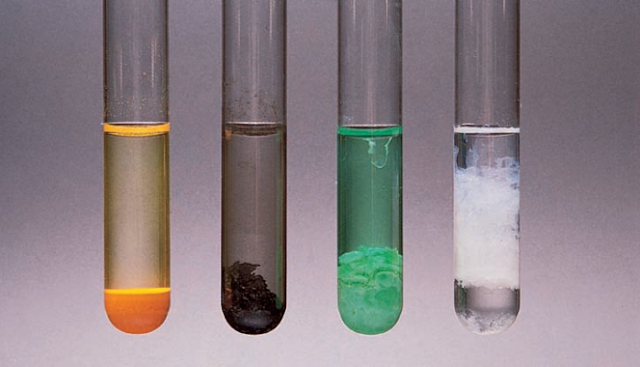 As pointed out earlier, when ionic compounds dissolve in water, they break apart into their component cations and anions. To be more realistic, the equations should show the dissociation of dissolved ionic compounds into ions. Therefore, returning to the reaction between potassium iodide and lead nitrate, we would write
Pb2+(aq) + 2NO3- (aq) + 2K+(aq) + 2I-(aq) → PbI2(s) + 2K+(aq) + 2NO3- (aq)

The preceding equation is an example of an ionic equation, which shows dissolved species as free ions. To see whether a precipitate might form from this solution, we first combine the  cation and anion from different compounds; that is, PbI2 and KNO3. Referring to Table 1, we see that PbI2 is an insoluble compound and KNO3 is soluble. Therefore, the dissolved KNO3 remains in solution as separate K+ and NO3- ions, which are called spectator ions, or ions that are not involved in the overall reaction. Because spectator ions appear on both sides of an equation, they can be eliminated from the ionic equation

Finally, we end up with the net ionic equation, which shows only the species that actually take part in the reaction:

Looking at another example, we find that when an aqueous solution of barium chloride (BaCl2) is added to an aqueous solution of sodium sulfate (Na2SO4), a white precipitate is formed (Figure 3). Treating this as a metathesis reaction, the products are BaSO4 and NaCl. From Table 1 we see that only BaSO4 is insoluble. 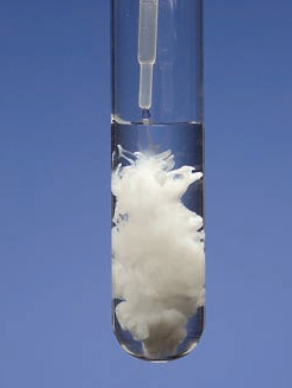 Therefore, we write the molecular equation as