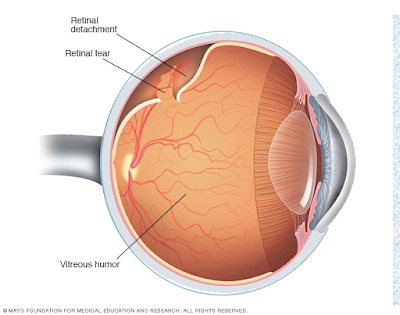 Retinal detachment is an eye disease caused by the detachment of the thin layer inside the eye called the retina. This condition is classified as an emergency and can cause permanent blindness if not treated immediately.

The retina of the eye is an important part that functions to process the light that is captured by the eye. Once captured, the light is converted into an electrical signal and transmitted to the brain. These signals are then processed in the brain and interpreted as images seen by the eye.

Retinal detachment occurs when the retina of the eye detaches from the blood vessels that deliver oxygen and nutrients. The following are 3 conditions that can cause retinal detachment:

There are a number of factors that increase a person's risk of developing retinal detachment, including:

Treatment for retinal detachment varies, depending on the patient's condition. If the retina is torn or perforated but has not yet been detached, the ophthalmologist can apply the following measures to improve vision and prevent the retina from detaching:

If the retina is detached, the doctor will treat it with surgery or surgery. The type of surgery performed depends on the severity of the patient's condition. These operations include: