Below we provide training materials to face the 52nd International Chemistry Olympiad (IChO) of 2020 which will be held in Istanbul Turkey.

Problem 1. A frog in a well
The energy levels of an electron in a one-dimensional box are given by:

in which h is the Planck’s constant, m is the mass of the electron, and L is the length of the box.
1)     The π electrons in a linear conjugated neutral molecule are treated as individual particles in a one-dimensional box. Assume that the π electrons are delocalized in the molecular length with the total number of N π electrons and their arrangement is governed by the principles of quantum mechanics.
a.   Derive the general expression for ∆ELUMO–HOMO when an electron is excited from the HOMO to the LUMO.
b.  Determine the wavelength λ of the absorption from the HOMO to the LUMO.
2)     Apply the model of π electrons in a one-dimensional box for three dye molecules with the following structures (see the structural formula). Assume that the π electrons are delocalized in the space between the two phenyl groups with the length L is approximately equal to (2k+1)(0.140) nm, in which k is the number of the double bonds

a.   Calculate the box length L (Å) for each of the dyes.
b.  Determine the wavelength λ (nm) of the absorption for the molecules of the investigated dyes.
3)     Recalculate the box length L (Å) for the three dye molecules, assuming that the π electrons are delocalized over the linear conjugated chain which is presented as a line plotted between the two phenyl groups (see the structural formula). The bond angle C–C–C is 120o and the average length of C–C bond is 0.140 nm.
4)     Give the following experimental data on the wavelength λ of absorption.

a.   Determine the box length L (Å) of the linear conjugated chain for each of the three investigated dyes.
b.  Tabulate the values of the box length L for the dyes calculated above by the three different methods, denoted as 1, 2, and 3. Choose the method which is the most fit to the experimental data.

Problem 2. Atmospheric Chemistry
Studying the reactions which take place in the atmosphere is crucial to help understand global climate and thus minimise our impact on the environment. Hydrogen sulfide, H2S, is a molecule which displays interesting chemistry in the atmosphere. H2S is present in natural gas and is also particularly common near volcanos.

The main process by which H2S is naturally removed from the air is its reaction with the OH radical (the main day-time oxidising agent in the atmosphere). The reaction happens in a single encounter between H2S and the OH radical.
(a)    Give an equation for the reaction of H2S with the OH radical to form water and another radical.
(b)   In order to determine the rate constant of the reaction in (a), dry H2S was generated in the laboratory by reacting iron(II) sulfide with hydrochloric acid. Give an equation for the generation of H2S in the laboratory.

The average emission rate of H2S in the air at a volcanic region can be taken to be 7.65 × 105 molecules cm–3 s–1. The concentration of H2S was measured to be constant over time, which means that the rate with which H2S is produced is the same as the rate at which H2S is consumed at this volcanic region. For a reaction that happens in a single encounter between two species A and B, the rate of reaction is given by:
rate = k × [A] × [B]
where k is the corresponding rate constant, and [A] and [B] denote the concentrations of A and B, respectively.
(c)    Calculate the concentration of H2S in the atmosphere in units of molecules cm–3.

You should assume that the only removal process of H2S from the atmosphere is its reaction with the OH radical, and that the average concentration of the OH radical is 1.1 × 106 molecules cm–3. The rate constant for the reaction in part (a) was measured to be k = 4.7 × 10–12 cm3 molecules–1 s–1.
(d)   The average concentration of H2S is usually expressed in units of μg m–3. Express the concentration of H2S found in part (c) in units of μg m–3.
(e)    Natural gas often contains sulfur in the form of H2S. To minimise the sulfur emission from the desulfurization of natural gas, H2S is partially combusted to form SO2 which then reacts with the remaining H2S to form elemental sulfur.
1)  Give an equation for the combustion of H2S.
2)  Give an equation for the reaction of H2S with SO2 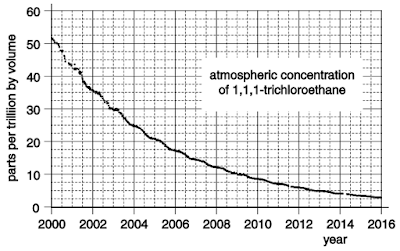 Assuming that the concentration of the OH radicals is constant over time, and that the only removal process of 1,1,1-trichloroethane from the atmosphere is its reaction with OH, we can find the observed rate constant (kobs) of the reaction using the following expression: 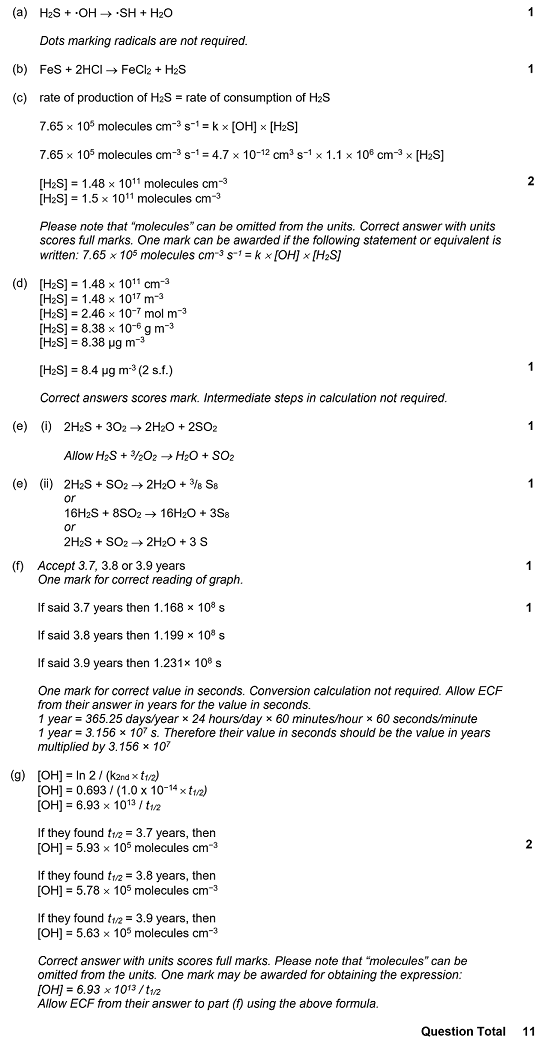 Problem 3. Magnetism of transition metal complexes
A transition metal complex containing diamagnetic ligands can be overall diamagnetic (all electrons are paired) or paramagnetic (having unpaired electron(s)) depending on the electronic configuration of the central metal ion, the nature of the ligand, and geometry of the ligand sphere. The magnitude of paramagnetism of a metal complex is commonly reported in terms of the effective magnetic moment (µeff) which can be obtained from the experimental measurement of molar magnetic susceptibility (χm) and is commonly expressed in Bohr magneton (BM). Theoretically, the magnetic moment is contributed by two components, the spin angular momentum and the orbital angular momentum. For many complexes of first row d-block metal ions, however, the contribution of the second component can be ignored. Thus, the so-called spin only magnetic moment can be determined by the number of unpaired electrons, n:

This is not surprising due to the fact that magnetic moment of octahedral complexes of Ni2+ (d8) usually does not obey the spin only formula. In these cases, the contribution of orbital angular momentum should be taken into account. The simplification of spin-orbit coupling model can be applied to calculate their magnetic moment:

where λ is spin-orbit coupling constant of Ni2+ and has the value of -315 cm-1 ∆oct is the crystal-field splitting parameter Calculate the effective magnetic moment of [Ni(H2O)6]Cl2 taking into account spin–orbit coupling. ∆oct of [Ni(H2O)6]2+ is 8500 cm-1.

4)     Dibenzoylmethane (DBM) is a well known chelating κ-O,O-ligand which can form stable complexes with many transition metal ions. Reaction of Ni(CH3COO)2.4H2O with DBM in EtOH-H2O solution gives light green crystalline complex A which loses 6.8 % of mass on heating at 210 oC in the air to form green solid B. The substance B is quantitatively converted to brown prismatic crystals C by re-crystallization in dry toluene. B and C are two polymorphic forms and their inter-conversion is reversible. The X-ray single crystal structure of C shows a square planar geometry with the chemical composition of [Ni(DBM)2]. While B is paramagnetic with effective magnetic moment of 3.27 BM, the complex C is diamagnetic. When B and C are kept in the air, they slowly convert to A. This happens much faster in the presence of some organic solvents (Inorg. Chem., 2001, 40, 1626-1636).
a.      Draw the splitting diagram of the d orbitals of Ni2+ in C and confirm its diamagnetic property.
b.     What is the molecular formula of A? Assume that A is a mononuclear
complex.
c.      The effective magnetic moment of A is 3.11 BM (Synth. React. Inorg. Met. Org.
Chem., 2009, 39, 694-703). What is the most suitable molecular geometry of A?
(Assuming that If A is an octahedral complexes, ∆oct of A is similar to that of
[Ni(H2O)6]2+).
d.     Draw all possible isomers of A.


e.      What do you expect for the molecular geometry of B? 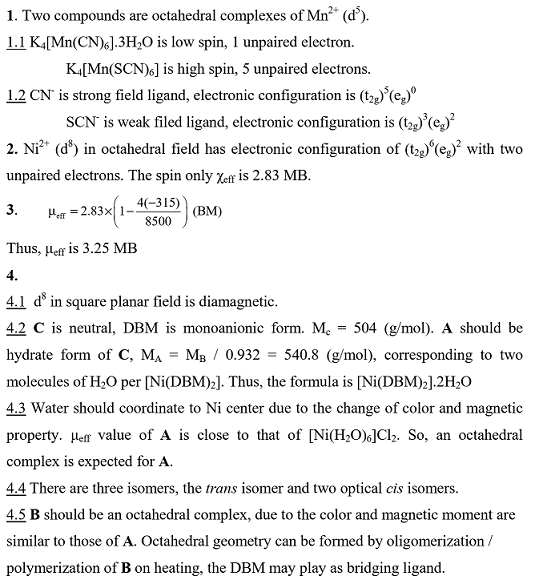 Problem 4. Molecule Twistane
Although the skeletal structure of cyclohexane (C6H12) is often represented as a regular hexagon, it is actually a flexible molecule that exists in a variety of different shapes referred to as conformations. Two of these conformations, the chair and the twist-boat, are shown below. The carbon atoms in the six-membered rings have been numbered 1-6 to show their connectivity

The chair is the lowest energy conformation of cyclohexane with all the bond angles almost equal to the ideal angle for a tetrahedral carbon atom. The twist-boat is higher in energy.

(a)    By how many degrees does the ideal C–C–C angle in the chair form of cyclohexane differ from that in a regular hexagon?

(b)   For each unique six-membered ring in adamantane, write down the numbers of the six carbon atoms in that ring in the order they are connected, beginning with the lowest number (e.g. -1-2-3-4-5-6-).
(c)    How many signals are there in the 13C NMR spectrum of adamantane (i.e. how many unique environments of carbon are there)?

(d)   For each unique six-membered ring in twistane, write down the numbers of the six carbon atoms in that ring in the order they are connected, beginning with the lowest number (e.g. -1-2-3-4-5-6-).
(e)    How many signals are there in the 13C NMR spectrum of twistane?
(f)     Adamantane and twistane are isomers of each other. What is their molecular formula? As all its rings are in the lowest energy chair conformation, adamantane is a very stable molecule. It was discovered as a component of crude oil in 1933. By contrast, twistane is a very strained molecule as all its rings are in the higher energy twist-boat conformation. It must be specially synthesised, which was first done in 1962. The synthesis is shown below. 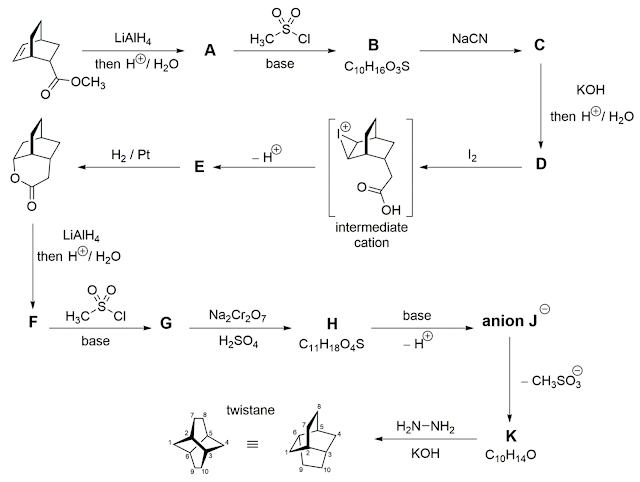 No C–C single bonds are broken in the synthesis and so those present in the starting material
remain throughout. They have already been drawn in your answer booklet and you must use
them for your answers for part (g).
(g)   Draw the structure of compounds A-H, anion J– and compound K.
(h)   Answer the following multiple choice questions in the answer booklet.
1)    How many planes of symmetry does twistane contain?
2)    How many rotational axes of symmetry does twistane contain?
3)    Is twistane superimposable on its mirror image?

Problem 5. The Organic Gas-Phase Dianion
The hydroxide ion is the strongest possible base in aqueous solution, but in organic solvents it is possible to have stronger bases. For many years the strongest known base was the methyl anion, but in 2008 a team of scientists synthesised the lithium monoxide anion which was found to be an even stronger base. 2016 has seen the records rewritten again as Australian researchers announced the formation of an organic gas-phase dianion (DEB2–) which has the highest proton affinity ever reported, i.e. is the strongest base.

With a proton affinity of 1778 kJ mol–1, the lithium monoxide anion was found to be a stronger base than the methyl anion. The lithium monoxide anion is formed in a mass spectrometer when a lithium oxalate anion, LiC2O4–, firstly loses a neutral molecule P of mass 44 and subsequently another neutral molecule Q of mass 28.
(b)   Draw the structure of the oxalate anion (C2O42–) and give the formulae for P and Q.

The organic gas-phase dianion (DEB2–) has the highest proton affinity ever reported of 1843 kJ mol–1. This dianion is produced from compound A which belongs to a family of disubstituted benzenes, C6H4R2, where both substituents R are the same. Compound A has the molecular formula C12H6O4 and effervesces on addition of sodium hydrogen carbonate.
(c)    Suggest the functional group present in R responsible for the effervescence, and hence deduce a structure for R.
(d)   Draw all of the possible disubstituted benzenes, C6H4R2, and state the number of signals you would expect in the 13C NMR for each.

DEB2– was observed in the negative-ion mass spectrum of Compound A. It is formed via species B2– and C2–. Compound A is found to have 6 signals in its 13C NMR spectrum. 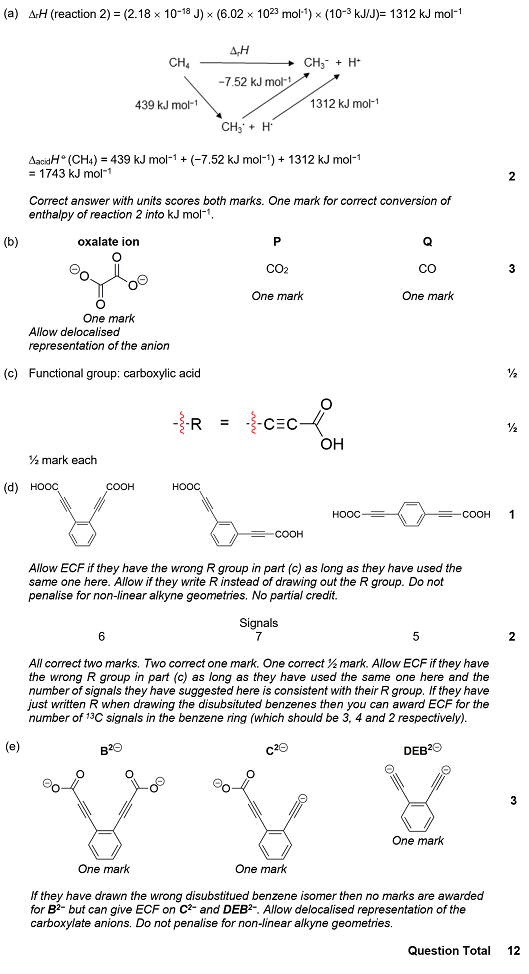