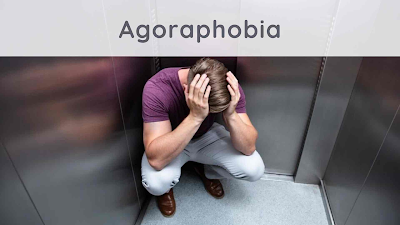 Agoraphobia or agoraphobia is an excessive fear or anxiety of places or situations that make the sufferer feel panicked, embarrassed, helpless, or trapped. Generally, agoraphobia occurs when the sufferer has experienced one or more panic attacks.

Situations or places that can cause a phobia in each person is different. Some people are afraid of certain conditions or situations, such as crowds, others are afraid of more specific things, such as blood or certain animals.

The exact cause of agoraphobia is not known. This condition can be experienced by a person since childhood, but is more common in women who are teenagers or young adults (less than 35 years).

There are several factors that can increase a person's risk of developing agoraphobia, namely:

The main symptoms of agoraphobia are fear and anxiety that arise every time the sufferer thinks about, experiences, or is in certain places or conditions, such as:

These symptoms will disappear when the sufferer stops thinking or gets out of the place and condition.

The fear and anxiety experienced by agoraphobia sufferers will generally cause physical, cognitive (thought patterns), and behavioral symptoms. The following is an explanation of the three symptoms:

The anxiety and fear experienced by people with agoraphobia can produce a variety of physical symptoms similar to panic attacks, such as:

The fear and anxiety experienced by people with agoraphobia can also lead to behavioral changes, such as:

You are advised to go to a psychologist or psychiatrist if you experience the above symptoms. Especially when the symptoms experienced often appear and have interfered with activities. Immediately see a doctor if there is a desire to hurt yourself or or commit suicide.

To diagnose agoraphobia, the doctor will ask about the symptoms the patient is experiencing. A physical examination and investigations, such as blood tests, will only be done to make sure the symptoms you are experiencing are not caused by another disease.

Next, the doctor will use the diagnostic and statistical manual of mental disorder (DSM-5) method to diagnose agoraphobia.

Treatment of agoraphobia aims to relieve fear and panic, as well as teach patients how to control themselves properly when thinking about or dealing with feared situations. Below are some of the treatment methods used:

Counseling with psychologists and psychiatrists can help patients deal with their fears. Some types of psychotherapy that can be done to treat agoraphobia are:

Drugs are used to treat complaints and symptoms that arise when the patient has agoraphobia. The drugs used include:

This program aims to help patients control their responses to things that make them panic or stress. This program consists of:

Severe agoraphobia that is not treated can make the sufferer always afraid, anxious, and panicked, when thinking about, experiencing, or being in the feared places and situations. Patients become unable to leave the house, go to school, or work, and cannot carry out normal daily activities.

Until now, there has been no definite way to prevent agoraphobia. However, there are several ways you can do to reduce the intensity of the anxiety and fear that arises, namely: